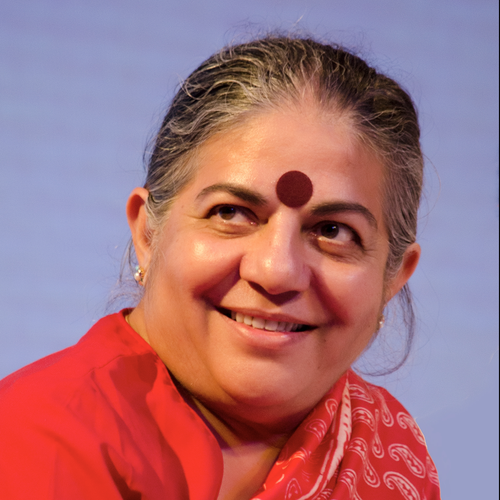 Sessions covered by this speaker

[Keynote] Vasudhaiva Kutumkam: Living with other sentient beings as One Earth Family

Join us for the symposium.

Besides being a physicist, ecologist, activist, editor, and author of numerous books, Vandana Shiva is a tireless defender of the environment. She is the founder of Navdanya, a movement for biodiversity conservation and farmers’ rights. She is also the founder and director of the Research Foundation for Science, Technology and Natural Resource Policy. Shiva fights for changes in the practice and paradigms of agriculture and food: “I don’t want to live in a world where five giant companies control our health and our food.”

Intellectual property rights, biodiversity, biotechnology, bioethics, and genetic engineering are among the fields where Shiva has contributed intellectually and through activist campaigns. During the 1970s, she participated in the nonviolent Chipko movement, whose main participants were women. She has assisted grassroots organizations of the Green movement in Africa, Asia, Latin America, Ireland, Switzerland, and Austria with campaigns against genetic engineering. Shiva has also served as an adviser to governments in India and abroad as well as non-governmental organizations, including the International Forum on Globalization, the Women’s Environment and Development Organization, the Third World Network, and the Asia Pacific People’s Environment Network.

Her writings include Staying Alive, The Violence of the Green Revolution, Biopiracy: The Plunder of Nature and Knowledge, Monocultures of the Mind, Water Wars: Privatization, Pollution, and Profit, and Stolen Harvest: The Hijacking of the Global Food Supply, as well as over 300 papers in leading scientific and technical journals.

In 1993, she received the Right Livelihood Award, commonly known as the “Alternative Nobel Prize.” Other awards include the Order of the Golden Ark, Global 500 Award of the UN, Earth Day International Award, the Lennon Ono Grant for Peace, and the Sydney Peace Prize 2010.

In 2003, Time magazine identified Shiva as an “environmental hero,” and Asia Week has called her one of the five most powerful communicators of Asia.

We use cookies This website (and some of its third-party tools) use cookies. These are important as they allow us to deliver an exceptional experience whilst browsing the site.